How Operators Explore for Oil, Drill Wells and Produce Oil

While it’s hard to imagine sitting here in my cubicle in Houston, there are thousands of feet of Earth directly below my feet. (For reference, the Earth’s radius is more than 3,000 miles, but most oil and gas deposits lie in the first miles beneath the surface.)

Oil and gas deposits formed millions of years ago when organic organisms (think plankton-like) died and accumulated, thousands of feet beneath you.

Some oil and gas deposits expand over hundreds of square miles of land, and some are small, scattered and localized pockets.

You may have heard of famous US oil and gas fields covering large areas or multiple states. With the activity in unconventional resource plays, the most active areas in the US over the last 10 years include the Permian Basin (Texas & New Mexico), Bakken Oil Field (Montana & North Dakota), SCOOP/STACK (Oklahoma) and Eagle Ford Shale (Texas). These oil and gas reserves require millions of dollars to utilize horizontal drilling and produce high volumes of petroleum.

While these are exciting, the majority of US wells are “stripper wells” or vertical oil and gas wells producing small volumes (less than 10 BOPD). There are tens of thousands of new wells to drill and old vertical wells to work over that can deliver value to investors.

Exploring for hydrocarbons (oil and gas) involves geoscientists (petroleum geologists and geophysicists) searching for deposits of oil and gas beneath the Earth’s surface. Most exploration for oil and gas involves highly sophisticated technology that detects the location and size of these deposits. When they detect underground “features of interest” or “leads,” they can collect more detailed seismic surveys.

Seismic surveying is a method (on the surface of the Earth) to measure the time it takes for sound waves to travel underground and through rock of varying densities.

Oil and gas exploration is an expensive, high-risk operation (so we recommend working with a team top-tier oil and gas experts). The maps that geoscientists create of an area are the first steps to finding whether there are oil and gas deposits thousands of feet below the surface of the Earth.

Oil and gas is a treasure hunt. The first to put the stake in the ground gets the valuables. Much like sports teams “acquire rights” for a new teammate, oil and gas companies acquire rights to drill, test and (hopefully) produce oil and gas.

Most companies lease the land. After the well is finished producing, operators seal the well, remove the equipment and return the land to its original state.

A landman negotiates, researches and completes land use and leasing deals. The most commonly leased types of land:

How to Calculate Your Net Revenue Interest

The negotiation of a lease involves giving owners a one-time payment (lease bonus) and a piece of the production, called a royalty, in exchange for time (usually 3-5 years) to explore for oil. In most instances (exception: “continuous drilling clause”), as long as there is one well producing hydrocarbons, then that one well will hold larger amounts of acreage and leases. This is called “held by production” or HBP.

The goal when exploring for petroleum-bearing reservoirs is to acquire the rights to land, drill a well and hold the acreage while you plan your full development or master plan.

After securing the lease, an oil and gas operating company has typically 2-5 years to begin production. This includes drilling new wells, working over old wells and installing facilities on the surface for processing the production. This requires upfront capital months (sometimes years) before the first oil goes to market.

Learn our formula for calculating net revenue and working interest in four steps.

Operating companies take big risks (money and time) to acquire and test for oil. To reduce the risk of drilling wells without payback, companies test prospects before drilling.

Geoscientists help pick the location to drill with the highest chance of success, and engineers create the plan for drilling, completing, producing and testing the first well.

Reservoir engineers and geologists estimate how much oil could be produced from the reservoir.

With these factors, management decides how to procure the money (e.g. debt or equity) to develop these wells and strategize the budget and timing of the wells.

Finally, after all planning is complete, it’s time to raise money to develop and test the well(s).

Several terms are important to understanding drilling for new oil and gas reserves.

Finding oil and/or gas in commercial quantities is exciting, much like finding buried treasure. You discovered resources trapped for millions of years and distributed them on the surface.

If the pilot program succeeded after drilling the first well(s), we are now armed with data (logs, core, production, etc.) we can use to update the seismic and nearby well data. Each new data point improves the geologic understanding of an area.

It’s time to develop the field and ramp up production. Some questions arise from management:

After finding the best drilling locations, it’s time to look at the big picture. Geoscientist, engineer and land teams determine the number of wells needed to optimally drain the reservoir. The strategy involves starting with the most likely to succeed locations and working toward the edge of the acreage or formation. Landmen may acquire additional acreage to drill more wells following a successful pilot and ensure the leases are maintained and properly held by production.

During this time, oil production is happening and wells are generating revenue.

At the end of the day, operators want to make the most revenue for the lowest cost in the quickest way. They achieve this through efficient operations:

Every reservoir depletes over time (some slower than others). When the well is at the end of its useful life, it’s time to divest the wells to another operator or plug and abandon the well.

For example, the operator developed the acreage with many wells, and the field’s production is declining. A year ago, the operator made 2,000 barrels of oil per day (BOPD), and this year it produces 1,800 BOPD.

After large amounts of capital are spent on the main or primary production, it’s time to optimize the well’s production and minimize production decline rates.

The term for wells that produce small volumes of petroleum is “stripper wells.” A majority of US producing wells are stripper wells that make less than 20 BOPD, so maximizing production and minimizing operating expense is paramount.

A generalized way to calculate the profit of an oil well:

Note: Depending on the state, you pay a “severance tax” to the state for every barrel of oil or MCF of gas.

The cost to operate wells includes expenses related to lease operators, workover crews, electricity, repairs, water disposal and other overhead. The revenue from the production of the well should exceed the cost to operate it.

Conclusion: What This Means for Investors 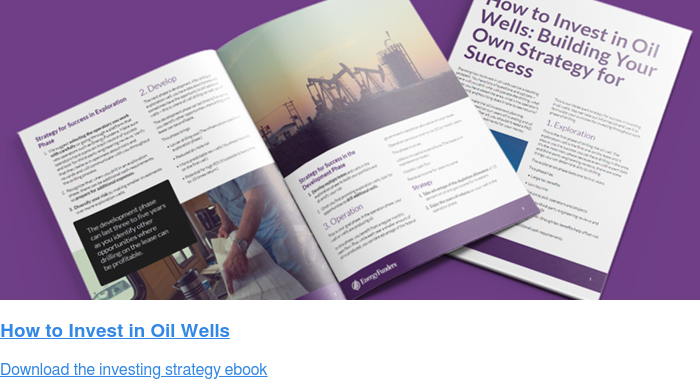 Your gross profits from this investment are taxed at 85%. The 15% depletion allowance is an additional tax benefit for oil and gas investments.

For US investors only. Check with your financial adviser to see how this applies to you.